This post examines how the latest available estimates of cumulative excess deaths during this pandemic compare to mortality patterns prior to the pandemic. Anchored to 2019, we compare the severity of the pandemic’s excess death toll to 123 causes of death documented in the Global Burden of Disease database (level-3 aggregation). While caveats apply relating to standard errors and possibility of bias, this approach provides a new perspective on the understated severity of the pandemic in particularly the developing world.

Before we start, let us first motivate the approach here and provide a few remarks on (1) excess deaths and how we measure them and (2) why we compare excess mortality estimates with pre-pandemic patterns of mortality.  A fuller discussion can be found in Annexes 1 and 2 to this post.

The concept of excess mortality provides the best method to assess the true and total mortality impact of the pandemic. By capturing mortality patterns beyond what would be expected under normal circumstances, we get an amalgamated insight into the effects of factors such as the misattribution of underlying cause of death or the indirect channels through which the pandemic raises mortality.

Excess death measures, however, are far from perfect. First, even in countries with solid CRVS systems that provide timely data, excess deaths remain estimates since they require an assessment of the counterfactual of what would have happened under normal circumstances. Second, the estimates require all-cause mortality data, which are not available everywhere on a regular basis. As a result, excess deaths are available only for some 80 countries.

That has recently changed.  New estimates have become available that directly estimate excess deaths in data-poor environments. The excess death estimates by The Economist are currently the best-in-class. They’re not without limitations themselves – see details in the methods section below – but they give us a solid starting point and are notable for their transparent disclosure of assumptions, methods and standard errors around the results.

Why compare with pre-pandemic patterns?

We will be comparing the mid-point estimates of cumulative excess mortality with patterns of of reported mortality prior to the pandemic. One comparison will be between the level of excess deaths during the pandemic and the level of deaths reported in 2019 where the cause of death belongs to one of the top 3 for each country in that year.

Why is this useful?

The chart below shows the top cause of death in 2019 that is exceeded by the estimated excess death toll during the pandemic. We focus on the leading causes of death, which we take to be the Top 3. A country is colored red when excess deaths exceed cause of death #1. The different shades of orange apply this logic to causes of death #2 and #3. Green refers to countries where excess deaths do not exceed the top 3 causes. Excess deaths may be negative for some countries, in which case they do not exceeded the death toll of any of the 123 disease families considered.

How to interpret these results?

As an aside, note that the full details of the methodology are available in Annex 2. Note also that this is a clickable map. The tooltips provide a step-by-step guide for each country on how the results were derived. For a non-interactive version of the map, click on “download image” within the map or here.

Next, let us characterize the distribution of countries by the ranking observed in the previous map.

A number of caveats apply to the excess death estimates used.

Second, the possibility of bias. Not only are the excess death measures estimated with a considerable degree of imprecision in especially the poorer countries, there are also reasons why the estimates may be biased (i.e. misrepresentative of reality). The Economist acknowledges two main reasons why and it turns out these are not just some after-thought but important qualifiers:

The second bullet point on bias is especially important.

The direction of bias is likely upward since reports on the ground in especially lower-income countries do not suggest a very considerable excess death toll. If we were to simplistically divide the world into groups of lower- and higher-income countries which are respectively characterized by data environments that are poor and rich, then structural differences between these groups could easily lead to an upward bias. Let’s focus on four structural differences:

For all of the above these reasons, we should approach the estimates as tentative and treat the results shown here as preliminary. We should also use complementary information at the country level to assess the true severity of the pandemic. Having said that, the estimates and results represent the best possible effort to convey a globally consistent picture of the impact of the pandemic and remain a good starting point.

In what follows, we expand on the extensive footnote of the map shown in this post.

The “excess severity” ratio. We express cumulative excess deaths as a ratio to pre-pandemic mortality (and not a proportion since it is a merely a comparison and not a share, i.e. the numerator is not part of the denominator). A few points on this:

Comparing “excess severity” with top causes of death. The next step in the analysis is to compare the ratio of cumulative excess deaths (adjusted and mid-points) to the proportionate mortality rates of the top causes of deaths. Let’s break this down:

Get notified about new material 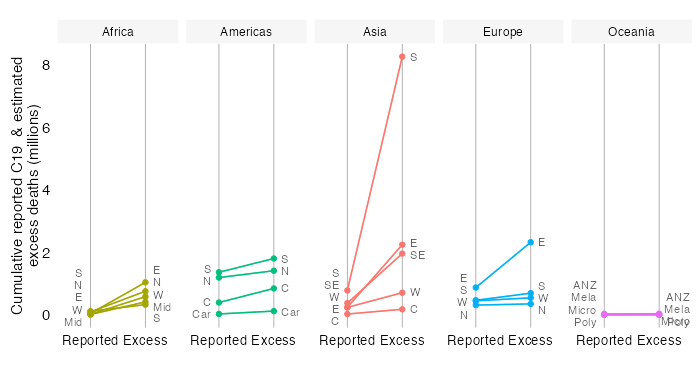 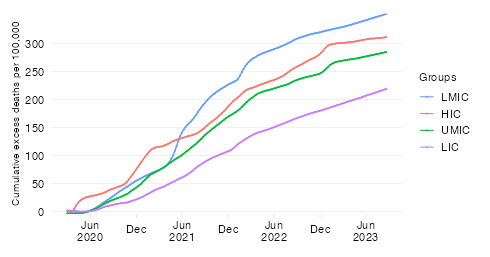 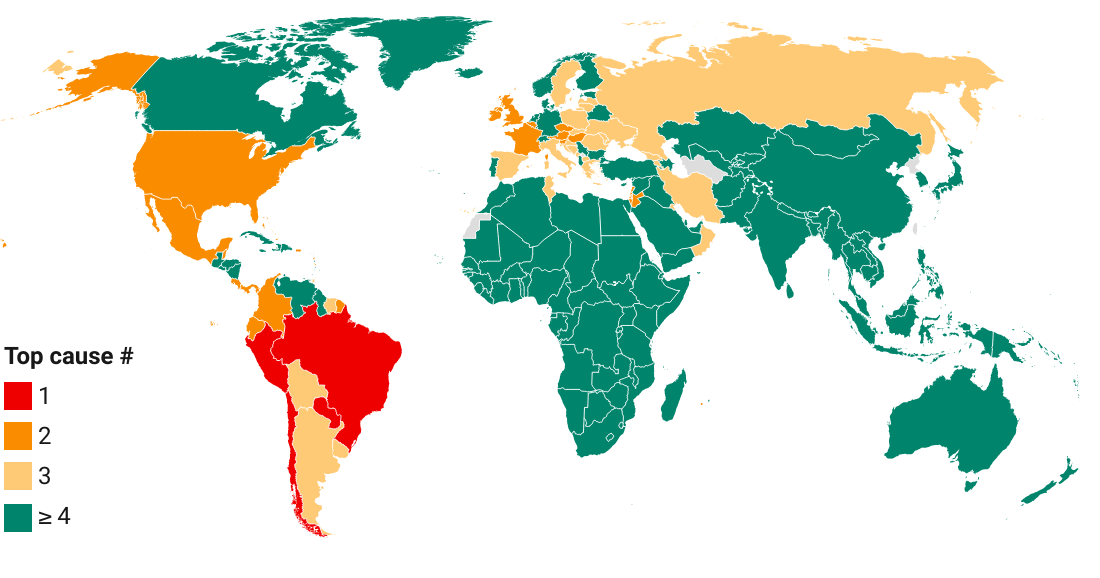 Four perspectives on the severity of the COVID-19 pandemic 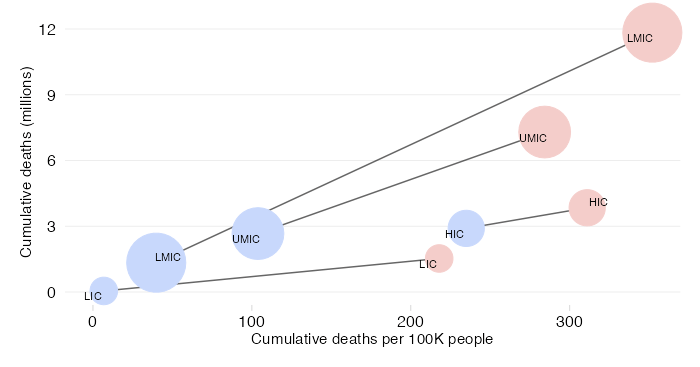 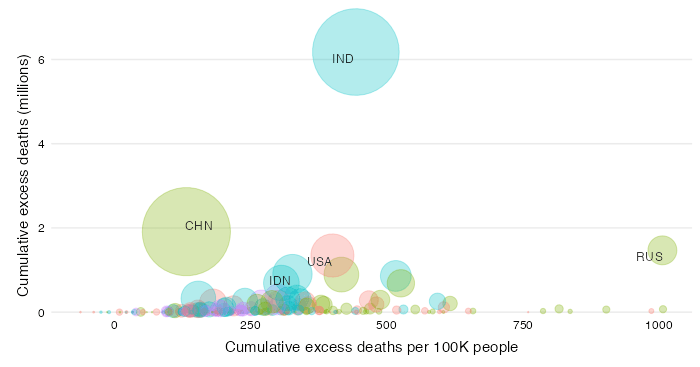 Keeping count of the big picture

Media attention has focused excessively on officially reported COVID-19 mortality rates. To assess global impact accurately, we need to look beyond that.

Four perspectives on the severity of the COVID-19 pandemic

This data analytics resource tracks pandemic inequality across countries. It visualizes inequalities in COVID-19 mortality, infection and vaccination by income group, region and subregion. Its insights touch upon three themes: the understated severity of mortality in the developing world, the unseen scale of the Omicron escalation and the unmet need for global vaccine equity.
© 2022 pandem-ic
·  CC BY
SIGN UP